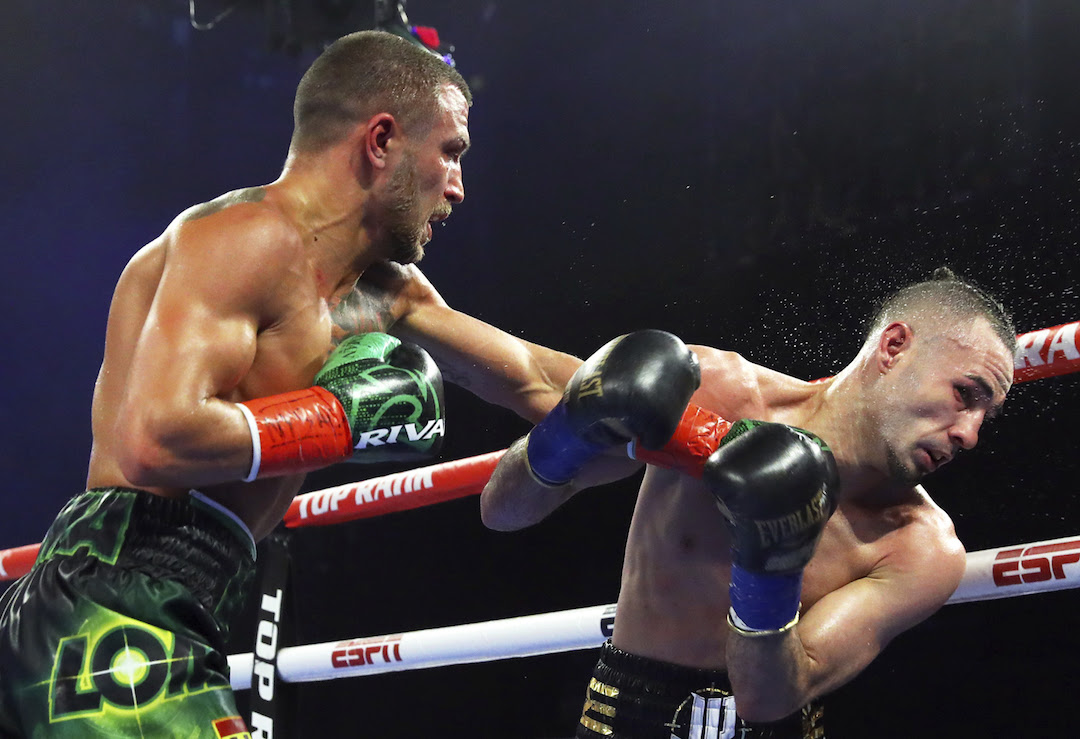 Lomachenko (12-1 9 KOs,) defeated Pedraza (25-2, 12 KOs) via unanimous decision in front of a sold-out crowd of 5,312 at the Hulu Theater at Madison Square Garden to unify world titles for the first time in his illustrious career.

“It was my dream to unify titles,” Lomachenko said. “It was my next goal. I can now focus on my next chapter.

“He’s a veteran. He did a very good job, and I respect Pedraza and his team.”

Said Pedraza: “I am happy with my performance tonight. I went 12 rounds with the best fighter in the world. I knew what we were going up against. I thought it was a close fight until the knockdowns. At the end of the day, I am proud of what I did.”

It was tactical fight, as Pedraza’s long arms kept Lomachenko at bay for much of the night. In the 11th round, Lomachenko, turned up the heat, scoring a pair of body shot knockdowns as Pedraza barely survived the round.

For Lomachenko, it’s on to the next challenge.

Emanuel Navarrete beat the long odds and stunned the rising superstar, Isaac Dogboe, via unanimous decision to win the WBO Junior Featherweight world title. The scores (116-112 2X, 115-113) reflected the action, as Navarrete was the aggressor throughout the fight.

“I thank Dogboe for this opportunity,” Navarrete said. “This world championship represents every day that I was working away from my family. This title represents sacrifice. I injured my right hand early in the fight, but I had the desire to be a champion and I did everything necessary to get the title, and I am very happy and proud to achieve this goal of being the world champion.”

Said Dogboe: “It was a great fight, and Emanuel Navarrete fought like a true Mexican warrior. Champions are supposed to keep going under any circumstance, but I just couldn’t get the victory. The best man won tonight.”

The Teofimo Express Rolls On

Teofimo Lopez (11-0, 9 KOs) showed why, at age 21, he is the sport’s fastest rising star, knocking out Mason Menard with a right hand at only 44 seconds of the opening round. Menard (34-4, 24 KOs) fell face-first, and the fight was immediately waved off.

“I knew he was a tough fighter. I knew he could fight,” Lopez said. “I wanted to test him, and I took a chance early in the fight. I know he trained hard, and he didn’t want it to go that way. But this is ‘The Takeover.’ ‘The Takeover’ has begun.

“He fought a very uncomfortable, dirty fight, but I dominated,” Besputin said. “I am ready for a world title fight next.”

Heavyweight Guido “The Gladiator” Vianello came, saw, and conquered in his pro debut, knocking out Luke Lyons (5-2-1, 2 KOs) at :29 of the second round. Vianello, a native of Rome, represented Italy at the 2016 Olympics.

“It was a dream come true to make my professional debut at Madison Square Garden,” Vianello said. “I hope I did Italy proud. I came here tonight to score a knockout, and I delivered.”

Josue “The Prodigy” Vargas (12-1, 8 KOs), a Bronx native, put on a show for the hometown fans, scoring three knockdowns en route to a fifth-round TKO against John Renteria (16-6-1, 12 KOs). Vargas has now won six straight since a controversial disqualification defeat.

Brian Ceballo (6-0, 3 KOs) cruised to a four-round unanimous decision against Daniel Calzada by identical scores of 40-36.