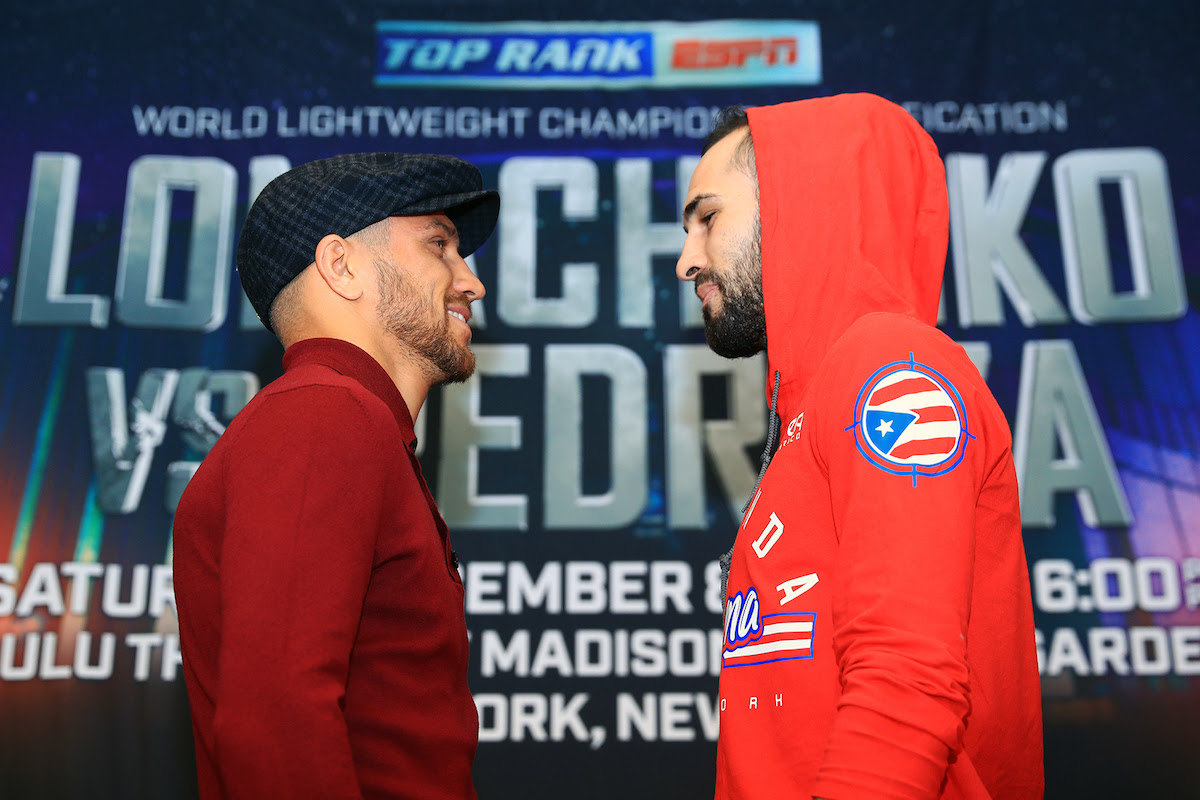 For Lomachenko – a top pound-for-pound fixture over the past couple of years – the bout marks the two-time Olympic Gold Medalist’s return to boxing following a surgical procedure on his shoulder. Even more astonishing than the fact the 30-year-old Ukrainian is returning to face a two-division champion in Pedraza (25-1, 12 KOs), is the fact that Lomachenko (11-1, 9 KOs) still doesn’t have a win total that falls in the teens.

Lomachenko, boxing’s fastest to ever become a three-division champion, enters the ring with an opportunity for another first in his short career – unified champion status. No disrespect to Gervonta Davis, but Lomachenko is by far the best fighter Pedraza’s ever faced, but the 29-year-old Puerto Rican comes into the fight fully redeemed after traveling to Glendale, AZ back in August to take out former champion Ray Beltran in his hometown. The win clinched Pedraza his third decision a row since 14-month hiatus from boxing following his punishing seventh round TKO loss to Davis in January of 2017.

Read below to see how the Bite Down Boxing staff sees this Lightweight showdown playing out on fight night.

The worst feeling in boxing is when one of your personal, favorite, fighters is facing someone who at the end of the day, might go down as one of the greatest fighters, ever.

I have always been a fan of Jose Pedraza.  My personal feelings as a fan towards him grew even more when I interviewed him and attended his title-winning performance against Ray Beltran in August.  It was awesome to see his career come full circle following his loss to Gervonta Davis in early 2017.

But fuck, how can any pick against Vasyl Lomachenko?

Pedraza’s performance against Beltran was remarkable.  He displayed exceptional footwork, boxing IQ, power and guts in defeating the hometown fighter for the WBO Lightweight Championship.

But fuck, how do you pick against Vasyl Lomachenko?

You just simply don’t but gloat in admiration if Pedraza pulls off the enormous upset.

Look, Lomachenko is at a level today that only a few fighters in recent memory can compare to.  His knack for having every tool in the box to go along with a superb mental sharpness, makes him seem unbeatable at times.  In moving up to 135 pounds and defeating a much bigger Jorge Linares, Lomachenko controlled the entirety of the fight, except for a split moment where he dropped his guard.

I mean, it’s hard to argue against a guy who has basically made his last 5 opponents quit.

Pedraza, for as good as he is and the pedigree of his amateur and pro career, has never faced a fighter like Lomachenko.  That’s not necessarily his fault as their aren’t many fighters in the history of the sport with the total package that Lomachenko poses.  On the other hand, I highly doubt Pedraza will bring anything to the table that Lomachenko has yet to see.

I look for Lomachenko to continue his stoppage streak on Saturday in unifying the WBA and WBO Lightweight titles.

I liken Lomachenko to a world-class drummer. Whether you favor Rush’s Neal Peart, the late Funky Drummer himself Clyde Stubblefield or one of today’s younger lions like Aaron Spears.

Lomachenko’s pace is ridiculous, he is talented with both hands, and he constantly employs dynamics once he settles into his rhythm – which is normally instantly. Every punch seems to have its very own purpose in addition to simply scoring for the southpaw. Some punches are just throw-aways, some move his opponent’s guard, lighter shots disguise the arrival of heavier bombs, and some are probing his opponents for reactions and tendencies. After he opens the bout setting the tone with work on the cymbals and chimes, once he heads to the toms and the snare his syncopation has proven to be lethal.

Lomachenko is masterful at being in the present while quickly transitioning to the future to consistently be ahead of his opponent. His creativity is disastrous for fighters, and his use of angles is overwhelming. We’ll just need to see how the shoulder responds to live action.

One interesting detail of this fight is Loma’s movement versus Pedraza’s unique erky jerky rhythm. Pedraza will have a slight height advantage and well over 5-inches in reach advantage. Now that we’ve seen Lomachenko on the canvas, courtesy of a straight right hand from Jorge Linares, Pedraza should lose his length and counter-punching ability to try to time Lomachenko before he completely gets a couple of steps to his right and turns Pedraza.

Pedraza simply isn’t the best fighter Lomachenko’s ever faced, and he’s been stopped before, in a bout where he couldn’t have fought a worse tactical fight. Lomachenko roaring back to stop Linares the last time he was at Madison Square Garden showed that his will to win is indomitable. Expect Pedraza to compete well out of the gate, as his choppy attack causes Lomachenko to figure out when the Puerto Rican boxer is truly in range. However, Lomachenko’s pace will gradually build into a full-on solo complete with body work and uppercuts until the punishment becomes too much over the fight’s second half.

Pedraza drew a tough assignment for his first title defense at Lightweight, and he’ll need to be near perfect to make it to the championship rounds, but he’ll give an effort that will make his fans in Puerto Rico proud.