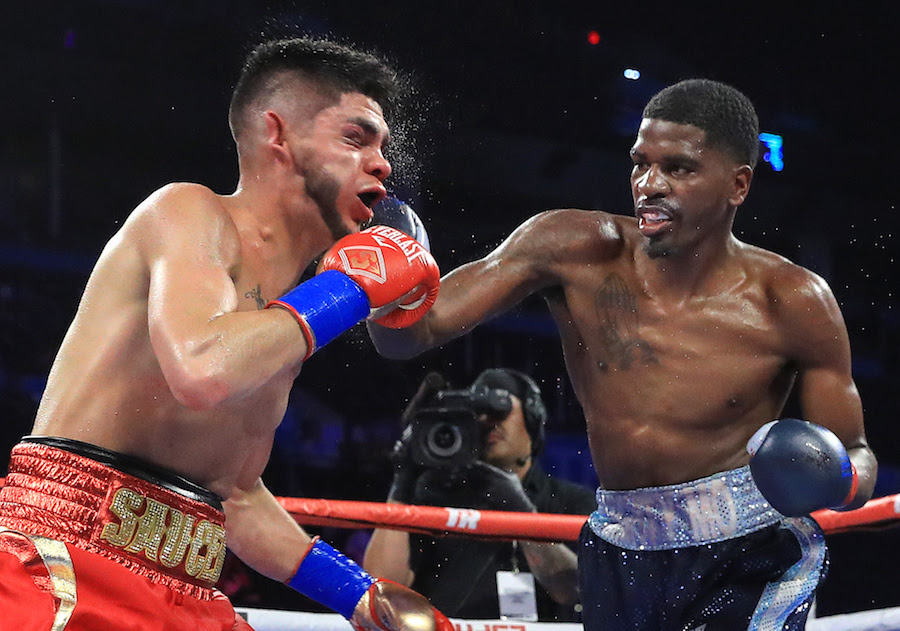 Said Saucedo: “He’s a champion for a reason. Now, I am going to rest, enjoy my family, and come back stronger. I gave it my very best in the ring.”

Saucedo (28-1, 18 KOs) landed the first major blow of the night, knocking Hooker down with a right hand in the second round, causing blood to gush from his nose. Hooker responded with a late flurry to end the round. The fight entered a familiar pattern, as Saucedo marched forward and Hooker (25-0-3, 17 KOs) landed flush counter punches.

Eventually, Hooker took over, as cuts over Saucedo’s left eye opened up. Hooker, using precision punching,  knocked Saucedo down with a right hand in the seventh. The end came soon after, and Hooker, a native of Dallas, Texas, left Oklahoma with his world title.

Egidijus “The Mean Machine” Kavaliauskas wanted to show the world that he deserves a crack at a Welterweight world title. The statement was emphatic, as Kavaliauskas blew out the previously unbeaten Roberto Arriaza (17-1, 13 KOs) in three rounds to retain the NABF title and pick up the WBO Inter-Continental Belt.

Kavaliauskas (21-0, 17 KOs) made no secret that the man he wants to face next is WBO Welterweight champion Terence “Bud” Crawford, who was seated ringside.

“I want to fight the best in the Welterweight division, and the best guy right now is Terence Crawford,” Kavaliauskas said. “I am ready for that fight next.”

Said Arriaza: “I know I had him in trouble. I was the one who was dominating and was in control of the fight. I’m sure that I was going to finish him within six rounds, but he surprised me with a punch behind the ear and then he connected me while I was on the canvas.”

* Left hook to the body put Lara down for the count

Seldin said: “It felt good to be back in the ring, injury-free this time. I was brought to Oklahoma City for one reason, and that is to fight the winner of the main event. And that is what I want next.”