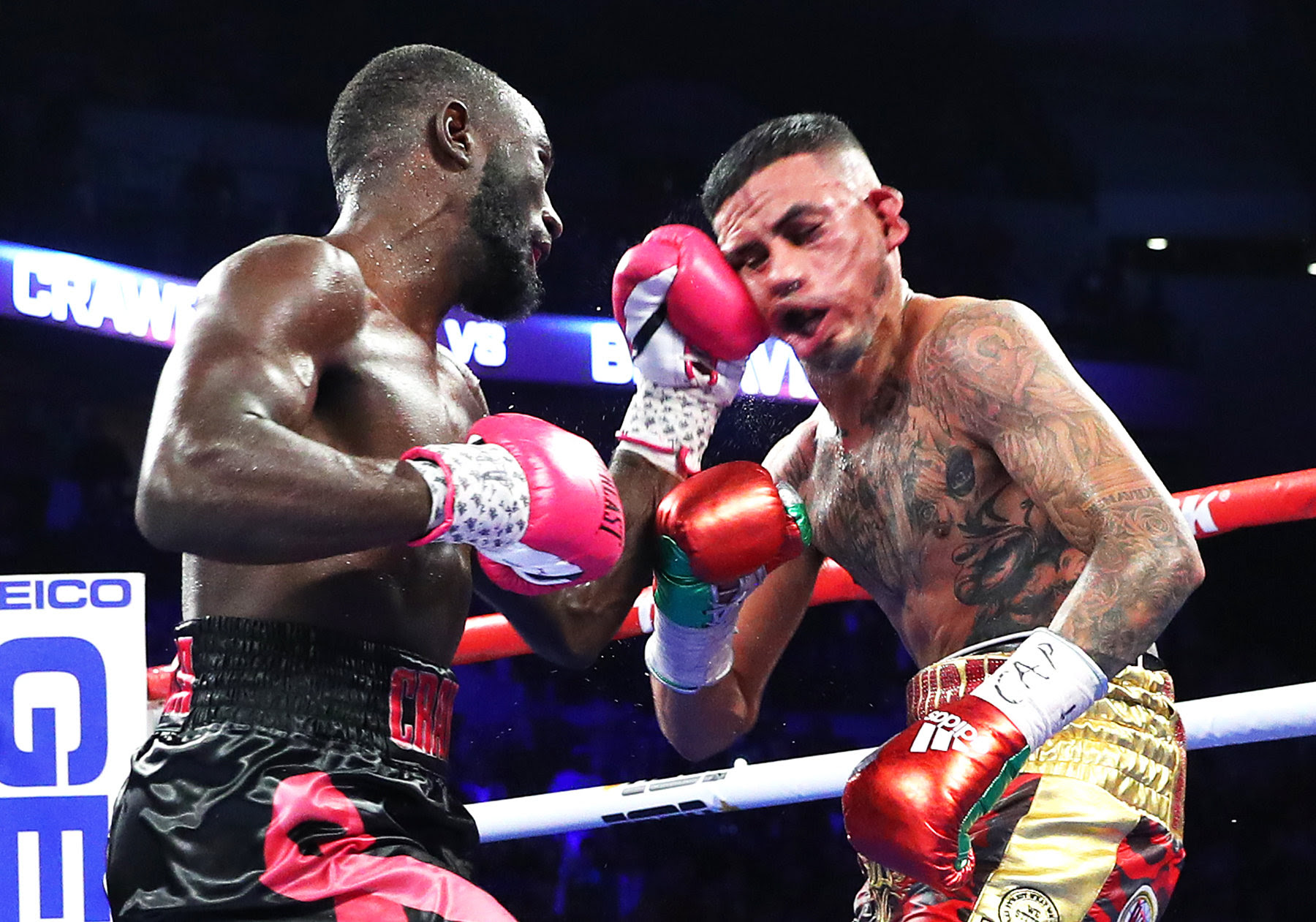 Crawford improved to 12-0 in world title fights with one of his most emphatic knockouts. An uppercut knocked Benavidez down and a vicious follow-up combination ended things for good.

“We knew that he wanted to get in my head and make it a firefight,” Crawford said. “I saw him in his corner taking deep breaths and knew he was done.”

Said Crawford’s trainer/manager Brian McIntyre: “I told Benavidez he was going to get his ass kicked. And that’s what Bud did.”

The opening rounds were closely contested, but as the fight entered the second half, Crawford’s combination punching told the story. Benavidez (27-1, 18 KOs) gave Crawford one of the toughest tests of his career, but it was not enough to unseat the pound-for-pound king.

Crawford, meanwhile, improved to 5-0 as a pro in Omaha. And once again, he sent the hometown faithful home happy.
Stevenson Stops Simion

Viorel Simion had never been knocked down as a professional. Featherweight sensation Shakur Stevenson changed all of that in a hurry, knocking Simion down three times en route to a first-round TKO in the scheduled 10-round co-feature. Stevenson (9-0, 5 KOs), a 2016 U.S. Olympic silver medalist, finished off Simion (21-3, 9 KOs) with a trio of devastating right hooks.

“My granddad told me the right hook was open, and I capitalized on it,” Stevenson said. “I want {former world champion} Lee Selby next. I feel like I’ve been calling him out forever.”

* Adames scored three knockdowns in the second round

Adames said: “I feel very good in the 154-pound division. I trained hard for this fight, and I did what I had to do. I took out a good opponent in two rounds. I know I’m ready for bigger fights. I want to give a world title to my country. I want to face the best and represent the Dominican Republic with great pride.”

Mayer said: “It was great going eight rounds for the first time. I felt like I could go 15 in there tonight. Ten rounds will be no problem.”

Nelson said: “I felt good showing up for the hometown fans.  My coach and I were talking. I had to stop fooling around and get him out of there.”

Alvarado said: “It was great to be on this stage again. I felt really comfortable in there with my reconstructed team. I did it again. I’m back. I’m ready for the top level again. It took me some time to get here, but I’m back.”