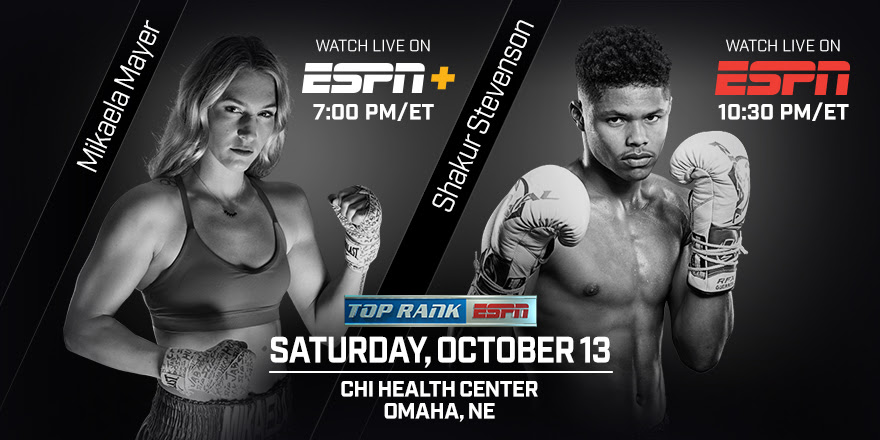 OMAHA, Neb. (Oct. 1, 2018) — Shakur Stevenson, the 2016 U.S. Olympic silver medalist, will face his steepest test as a professional when he takes on Duarn “The Storm” Vue for the vacant WBC Continental Americas Featherweight title on Saturday, Oct. 13 at the CHI Health Center Omaha. Stevenson vs. Vue will be televised on ESPN at 10:30 p.m. ET before pound-for-pound great Terence Crawford’s WBO welterweight title defense against Jose Benavidez Jr.

All undercard bouts will stream live in the United States at 7 p.m. ET on ESPN+ – the new multi-sport, direct-to-consumer subscription streaming service from The Walt Disney Company’s Direct-to-Consumer & International segment in conjunction with ESPN.

Promoted by Top Rank, tickets to this world championship event are on sale now. Remaining tickets, priced at $178, $103, $63, and $38, not including applicable fees, can be purchased at the CHI Health Center Omaha box office, all Ticketmaster outlets, by phone at 800-745-3000, or online at ticketmaster.com.

“The world is going to see the real Shakur Stevenson on Oct. 13,” Stevenson said. “With my team, Top Rank, and ESPN behind me, I should be world champion in 2019.”

“I am very thankful for this opportunity,” said Vue, who is promoted by Greg Cohen Promotions and Supreme Hits. “Get ready because ‘The Storm’ is coming!”

Stevenson (8-0, 4 KOs) was one of the most highly touted amateurs coming out of the 2016 Olympics, and less than 18 months since turning pro, he has acclimated seamlessly to the paid ranks. He is 4-0 thus far in 2018, including second-round stoppages against Roxberg Patrick Riley and Aelio Mesquita. The Mesquita victory included five knockdowns and came on the undercard of Crawford’s title-winning June 9 stoppage victory against Jeff Horn in Las Vegas. In his most recent bout, Aug. 18 in Atlantic City, N.J., Stevenson scored an eight-round unanimous decision against Carlos Ruiz, who has never been stopped as a professional.

With my team, Top Rank, and ESPN behind me, I should be world champion in 2019. – Shakur Stevenson

The ESPN+ undercard broadcast is as followed: