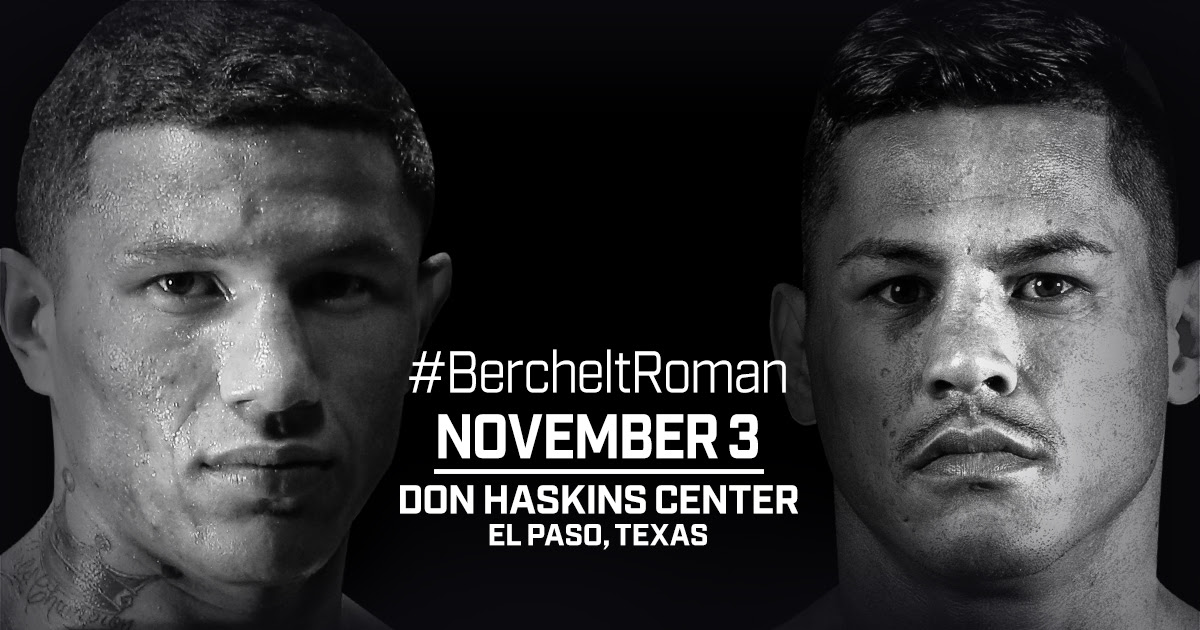 For Miguel “El Alacrán” Berchelt and Miguel “Mickey” Roman, this is the fight they demanded, a throwback all-Mexican battle that promises to deliver on the pre-fight bluster.

Berchelt will make the fourth defense of his WBC Super Featherweight title against Roman on Saturday, Nov. 3 at the Don Haskins Center on the campus of The University of Texas at El Paso (UTEP). Berchelt-Roman and a soon-to-be announced co-feature will stream live in the United States beginning at 9:30 p.m. ET on ESPN+ — the new multi-sport, direct-to-consumer subscription streaming service from The Walt Disney Company’s Direct-to-Consumer & International segment in conjunction with ESPN.

Promoted by Top Rank, in association with Zanfer Promotions and Promociones del Pueblo, tickets go on sale Friday, Sept. 21 at 10 a.m. MDT. Priced at $250, $150, $75, $45, and $35, tickets can be purchased online at Ticketmaster.com, all Ticketmaster outlets, and in person at the UTEP Ticket Center.

“Top Rank is very pleased to be able to present a truly great championship fight between two Mexican warriors in the great city of El Paso, which has hosted so many significant boxing events in the past,” said Top Rank CEO Bob Arum.

“I have wanted this fight for a very long time,” Berchelt said. “Roman has been talking a lot. I can’t wait to be in the ring with him. I am happy to fight in El Paso, which is the perfect location for a fight like this. I will show all the fans that I am on my way to becoming one of the great Mexican champions.”

“Berchelt is in for a big surprise,” Roman said. “He’s never seen a Mexican warrior like me before. The fans are going to be on my side, and I know I will be the new WBC champion.”

Berchelt (34-1, 30 KOs), a Cancun native who now resides in Mérida, is an eight-year pro who is equally adept at boxing and brawling. The only hiccup on his record occurred on March 15, 2014, when a left hook from Luis Eduardo Florez put Berchelt down in the opening round. While many observers felt the stoppage was a bit premature, Berchelt rebounded to win his next nine bouts by knockout, including winning a WBO interim 130-pound title, before challenging Francisco Vargas for the WBC Super Featherweight title on Jan. 28, 2017. In one of the year’s best fights, Berchelt landed more than 400 punches, breaking down Vargas en route to an 11th-round knockout victory. In his first title defense, he outboxed Takashi Miura to score a wide unanimous decision win. Berchelt is 2-0 in 2018, most recently knocking out former world champion Jonathan Barros in the third round in a fight that streamed on ESPN+.

Roman (60-12, 47 KOs), from Ciudad Juarez, Chihuahua, Mexico, is a 15-year pro whose back-and-forth battles have earned him a reputation as one of the sport’s most reliable action stars. He’s fought a litany of the sport’s top fighters from 122 to 135 pounds. In a roughly seven-month stretch from November 2013 to June 2014, he scored knockout victories over former world champions Daniel Ponce De Leon and Juan Carlos Salgado. Roman, who previously challenged for world titles at Featherweight and Lightweight, will be making his third attempt at a world title. He made an impression on American fight fans when he fought Miura on the Berchelt vs. Vargas undercard. Despite being knocked out in the 12th and final round by Miura, Roman battled through a vicious cut around his right eye. Roman is 4-0 since the Miura defeat, a stretch that includes a TKO win against former two-weight world champion Orlando “Siri” Salido.